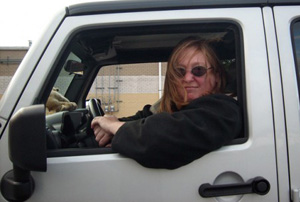 JoMarie Fecci:A modern nomad, JoMarie Fecci has spent twenty five years roaming the world with a camera as a photographer, before returning to New York to become Creative Director at Havas PR (formerly Euro RSCG Worldwide) the North American earned-media and buzz boutique responsible for award-winning campaigns like One Young World and Ford’s “Warriors in Pink”.

As a photographer Fecci travelled the globe spending time in Europe, the Middle East and Africa. Fecci has her Master’s in Foreign Service, from Georgetown University’s Graduate School of Foreign Service. In her free time, Fecci enjoys Jeeping and backcountry exploration. She is a private pilot, and is currently working on her instrument rating.

Isabelle Nikolic: Isabelle Nikolic has been teaching in some of the most difficult Paris suburbs for 10 years. Previously, she spent 15 years as a charge d’assistance for French assurance firms, responding to emergencies, translating and organizing emergency medical care and repatriations for travelers in trouble.

Languages have always been important to her. Nikolic speaks French, English, Serb, Russian and a bit of Spanish. As a child of immigrants in France, she has been traveling her whole life. She would go regularly to Yugoslavia and Greece, by car, bus or train, via Italy, Switzerland, Germany and Austria. The trips were long, and often uncomfortable, but always worth while.

Voyaging far from her home in France remains a great pleasure — seeing and feeling the lives of others, learning to understand their perspective. She enjoys discovering the common points across cultures, but also appreciates exploring the differences.

As a university exchange student, Nikolic experienced the Soviet Union under Gorbachev in 1986-87, then returned to see how life was changing there as the Soviet period came to a close in 1992.

Nikolic has lived in New York, and in 2010 set out with Fecci on “The Great American Road Trip,” a six week journey of discovery, exploring the historical and social dimensions of the “road” that so many travelled in search of the “American Dream.”

Nikolic is an avid runner, and has participated in marathons and semi-marathons in the U.S. and France.